The Tummy Team is for men too!

Diastasis recti in men is more common than we think. Read the testimony of a 71-year-old man who healed his diastasis and relieved his pain through our program. David started with a 6 finger wide diastasis and a 38″ belly when we started with him. During the course of only 4 sessions, he completely closed his diastasis, relieved his back pain, and measured only 34″ at on his final appointment. He had been dealing with this for over 8 years!

“This is to thank you [Kelly], Gillian, and the entire Tummy Team for the fantastic result I obtained using your program. I hope my results might inspire some others since diastasis recti in men is apparently pretty common.  If a 71-year-old male with a fairly severe diastasis that had persisted for several years can make a full recovery then I would think just about anyone could.

My problem began at least eight years ago and kept getting worse.  My stomach protruded so badly I looked pregnant, not an attractive “look” on a man. I consulted two board-certified plastic surgeons who told me diastasis recti in men could not be helped with exercise and that the only “cure” was surgery. I tended to believe them because the many abdominal exercises I had tried did nothing (why crunches don’t work). It turned out, as I learned from Gillian, that these exercises were exactly the wrong kind to do.

The surgery, however, leaves a large scar, takes months for a full recovery, is quite expensive, has an uncertain outcome and also carries with it the risk of serious infection, among other things. I did some research for diastasis recti in men online and found The Tummy Team.  I was skeptical this would work in my case. It appeared to be effective in younger people, especially postpartum women, but I had doubts it would work in an “antique” like me. Nonetheless, it seemed worth a try, given that the only alternative was major surgery.

Not too long after starting the program with Gillian, I departed on a long world trip that made it more difficult to do the exercises and wear the splint, but thanks to the expert advice Gillian gave me, I was still able to make good progress while traveling. I continued after returning and in less than four months from that point, I first started the program I had complete closure of my diastasis. Now, I can look at myself in the mirror without wincing. I lost four inches around the middle without any loss in weight and have a flat belly again.

It’s amazing and highly gratifying that something I had suffered from for years could be cleared up in just a matter of a few months. The exercises were easy to learn and follow, and the splinting, which I had feared would aggravate my chronic acid reflux, actually seemed to make it better. My chronic back pain has also significantly improved.  I still wear the splint at night simply because it makes me feel more secure and continues to help with the nocturnal reflux.

I can’t thank you enough Gillian. Healing diastasis in men is possible without surgery! To all at the Tummy Team: Keep doing this great and much-needed work.”

It is never too late. Let us help you! The Tummy Team has helped thousands of clients locally and internationally with their comprehensive online core rehab programs. The core is the foundation for all your movement all day long. If you are struggling to really connect to your core, let us help you. Check out Core Foundations for Men by clicking the image below! 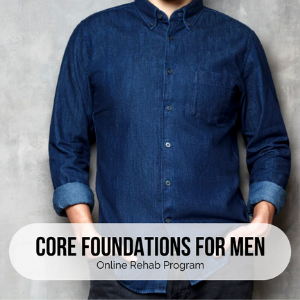 Be sure to post your questions and feedback on this blog in the comments below! Subscribe to receive a notification when we post a new blog…

16 responses to “Diastasis Recti in Men”

This site uses Akismet to reduce spam. Learn how your comment data is processed.

Sign up for our newsletter and receive updates for when we release new
tips, resources, and promo codes!

It's Diastasis Recti Awareness Month! All online programs are 15% off for all of July! We also have a new web page for you... Learn More
FATHER'S DAY SALE - Men's Online Programs, Men's Program Vouchers, & Memberships 25% off SHOP NOW